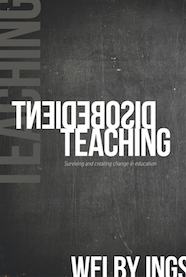 Welby Ings doesn’t tell you how to be a teacher, he shows you who you can be.

Disobedient Teaching was profound not because of what Ings was saying but how he was saying it. He pointed out many examples of wonderful teaching or leading educational change, often involving persisting for what was right despite resistance, anger and even threats. But more importantly, the examples were inspiring. In one example Welby describes how he helped hide Pacific Island students under a classroom so immigration officials would not deport them under the draconian New Zealand laws of the time. In another example he describes how he enabled his students to deeply understand prejudice by asking them to walk through town, each student on their own, dressed as ‘losers’. This was a risky but well-planned and weighty learning experience for the students.

I can’t do justice to what he shows the reader. You have to read and feel for yourself.

Clinton Golding is Associate Professor at the University of Otago Higher Education Development Centre. His previous positions include Philosopher in Residence at Rangitoto College in Auckland, and Thinking Coordinator at Queen Margaret College in Wellington and St. Cuthbert’s College in Auckland, where he worked to develop the thinking of staff and students. He was also a senior lecturer at The University of Melbourne where he received 5 local and national teaching awards.
View all posts by Clinton Golding →
This entry was posted in Book review, Learning to teach. Bookmark the permalink.
%d bloggers like this: